A kit that can be used to record distant sounds that it is pointed at.

The Telinga Parabolic Microphones are designed to be reliable, lightweight and very easy to use. The primary use of this parabolic microphone is wildlife audio recording. The dish funnels sound into the microphone, which allows for recording sources from farther distances.

If you would like to know more about why you would want to use a Parabolic Microphone setup and its pros and cons, Cornell's Lab of Ornithology has a helpful video discussing this item. How To Record Audio - Parabola

Store the dish with the opening down on a flat surface. Clean the dish only with soap and water. Do not use detergents. The dish can be rolled into a “cigar-like” shape with a diameter of about 6inches. If put on a flat surface and left for a while it will regain its shape. If the dish must be used instantly, however, you can make a cross of adhesive tape over the opening. After setting up the microphone, you can place the windcoat on the front of the dish for further wind protection.

This is the “old way” to use a parabolic mic. In this traditional way, the mic capsule will point outward from the dish. The mic should not extend past the orange rubber triangle at the front of the zeppelin. The stopper prevents unwanted noise from travelling through the tube. It cannot be used in the forwards method with the include mic, as the mic is too long and shouldn’t extend past the zeppelin.

Using with a Tripod 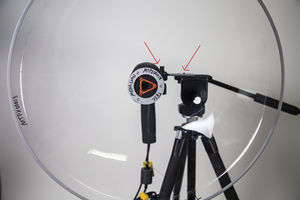 See the Media Loan Catalog for more info about the below items.