Please Note: the exposure meter is activated every time you remove the lens cap. It is important you keep the lens cap on except when operating the camera. Leaving the lens cap off will gradually drain the battery, resulting in inaccurate exposure measurements. The lens cap also protects the lens from scratches.

The SMC Pentax-A Lens has an "A" setting located on the lens aperture ring next to "22" which does not function with the K1000 body. If you accidently get the ring locked in the "A" (auto) position, push the small black button next to the "A" and rotate the ring to the aperture scale.

Media Loan has a few lenses available with the K mount: several 28mm (wide angle); a couple of zoom lenses (28 - 105mm) and macro lenses. If you wish to use other focal length lenses, you must use the K to S adapter (available separately) and you must use only S (screw) mount lenses. WARNING! Installing and removing the adapter is tricky. Have the procedure demonstrated for you when first using the adapter or follow the included instructions. The adapter and the camera lens coupling mechanism are easily damaged. Use care to avoid touching the mirror behind the lens. Permanent damage can result. Please keep the adapter and instructions in the protective pouch when not in use!

Depth of field preview is not possible with the K1000 when equipped with the standard SMC Pentax-A K mount lens. You will see depth-of-field focus when using accessory lenses in combination with the K to S adapter. The adapter does not couple to the automatic diaphragm feature, therefore optional S Mount lenses read and operate in the manual stop-down mode.

To remove the lens,

To mount a lense,

While looking through the viewfinder, turn the focusing ring until your subject comes into sharp focus.

Another way of setting the focus is to 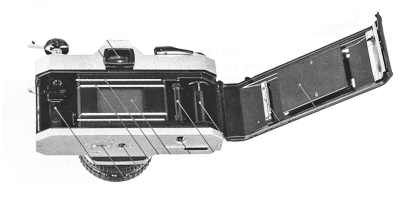