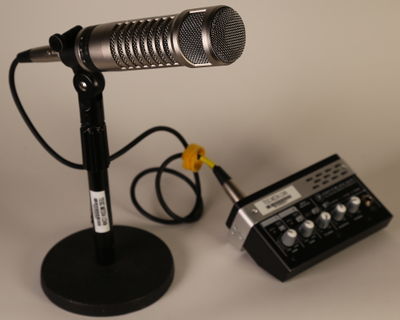 All sounds that we hear are just air pressure variations hitting our ears at different rates. A speaker or piano radiates these variations of air pressure, while a microphone captures the variations. If you hit a drum or pluck a guitar, it makes sounds because it is moving back and forth repeatedly. When moving out, it produces higher pressure for air particles to squeeze together and then when moving back, the surface creates low pressure for air particles to spread out. This process repeats until the energy put into the drum or guitar has been dissipated and it stops moving. The high and low pressure repeating is a wave.

All Microphones turn acoustic sound into analog signal. Depending on the mic, it may need to be supplied by a battery or "phantom power," which is usually 48 volts of electricity sent to the mic from whatever you are connecting it to, such as a mixer. There is often a button that says "48v" to enable it. You can do a lot with microphones and there is a great variety of them used for different purposes. We have a catalog of Microphone Catalog with information about each mics polar pattern, transducer type, uses and other useful information.

Digital Audio Workstation, or DAW for short, is versatile tool for recording and editing your audio. There are many different kinds, but they all rely on the same principle of sound design, so if you learn one, you can learn the others. They have a mixer view or some kind usually at the bottom to represent the same kinds of controls you would have on a physical mixer. There is also a track view, where you get to see the waveforms recorded, from left to right, in each track stacked vertically. Most DAWs have the ability to use midi which might be in a midi track, mixed in with all the audio channels.