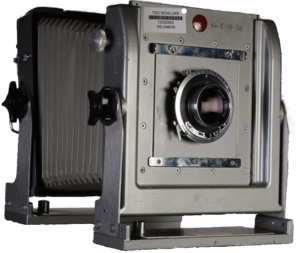 An old camera style comprised of two adjustable panels on rails that are connected with bellows. The light comes in the front lens, travels through the light sealed bellows and hits the large format film. The camera uses large film sheets (compared the the small 35mm rolls) and is therefore capable of producing images with the most detail possible.

Large format view cameras are usually tripod mounted and lend themselves to a more contemplative style than the more portable 35mm and 2 1/4 formats. The Calumet 4x5 Standard model view camera is a lightweight, portable tool that produces superior, fine grained images because of its large format and ability to adjust for a minimum of image distortion.

Media Loan's 4x5 cameras come equipped with a 150mm lens which is a slightly wider angle than normal. It allows for a 44 degree angle of view, while the normal 165mm lens allows for a 40 degree angle of view. Although the controls on each of Media Loan's 4x5 lens may vary in terms of placement and style, the functions remain the same. Some of the lenses have an additional setting for strobe flash or flashbulb use. On these lenses, use the X setting for use with a strobe flash (It’s crucial for the setting to remain on X while using the studio) and the M setting for use with a flashbulb (Media Loan does not support flashbulbs).

When checking out a 4x5 camera from Media Loan, patrons will need to obtain a tripod, a light meter, one or both types of film holders, and a changing bag for sheet film loading. Each sheet holder can be loaded with two sheets of film, a process that must be done in total darkness. The Polaroid holders can only be loaded with one sheet of film at a time, but each sheet is light protected.

Setting Up and Focusing Image

Set the camera on the tripod, attach a cable release to the shutter mechanism, level the camera and return all controls to their zero-neutral (centered) position. Open the shutter for viewing by cocking it and pressing the small, adjacent locking lever on the top, outer rim of the lens. Open the aperture to allow maximum light through the aperture for focusing.

Frame your subject at first by centering the image on the groundglass in the rear of the camera. The glass has a grid inscribed on it which can be used to aid positioning. The image will be reversed from top to bottom as well as from side to side.

Use the control knobs to center the image - the back of the camera will move from side to side and the front lens board will move up and down or side to side. Before attempting to move any camera part, be sure to loosen the associated thumb screw or clamp. After making adjustments, tighten the thumb screw or clamp finger tight. See the section later in this document entitled "How to Perform Camera Movements" for information on which knobs control specific functions.

You will need to adjust the focus of your image as you compose. This is done by sliding either the back of the camera or the lens board in front until the image appears sharpest. To do this, loosen the front and back locking screws, then adjust the focus with either the adjacent focusing knobs or by lifting up the focusing knob release lever and sliding the front or back of the camera along the rail.

The pebbled texture of the glass also makes it difficult to find the sharpest focus. The point of sharpest focus is where the converging light rays from the image come together. So it is sometimes easier to focus for image brightness than for image sharpness.

As with any other lens, the overall depth of field of the view camera lens will be controlled by the size of the aperture: the smaller it is, the greater will be the depth of field. Select a point approximately one-third of the way into the subject on which to focus. The resulting area of sharpness will be twice as deep behind the point of focus as in front of it.


How to Perform Camera Movements


To swing the front or back of the camera, loosen the swing lock knob, and rotate as desired.


To rotate back, release the clamping lever and turn the back to the position you want. It can be locked at any point with the clamping lever.
(The spring pressed ball catches indicates centered positions on both vertical and horizontal position.)

CAUTION: If movements are too extreme the bellows can block light from hitting the negative!

Camera Movements - How They Affect the Image

The tilts, swings, slides, and rising and falling front of the 4x5 camera allow the photographer to correct converging or diverging lines in a composition or to deliberately distort an image. Tilt and swing refer to the movements of the front or back of the camera at an angle. Tilting moves the front or back around a horizontal axis. Swing is the movement around a vertical axis - it twists the front or back to the left or right.


A slide of either the back or front of the camera produces similar results - image shape does not change with a back slide, but it changes slightly with a front slide. Rise or fall of the front causes a change in the point of view (or the space relationship) between any objects in the frame as well as a slight change in shape.

After you've made the final adjustments to your image composition, you're ready to load film into the camera. As mentioned earlier, Media Loan can provide two types of film holders for the Calumet 4x5: a 4x5 sheet film holder and a 4x5 Polaroid pack film holder.


Before loading film into the sheet film holder, the holder must be cleaned. Remove the slides and open the flaps at the bottom of the holder. Brush out the entire interior of the holder on both sides. (A small bristle paintbrush works well.) Use a soft cotton cloth to wipe the slides clean.


Use the left thumb and forefinger to help guide the edge of the film and push completely into place. Slip a fingernail under the end to try and lift it up. If it lifts up, the film hasn't actually slid into the grooves.


Finally, close the flap at the bottom of the holder and insert the dark slide with the lighter edge (silver or white) out - indicating the film is unexposed. The light colored side has a series of notches which will facilitate the process in the dark. After exposing the film, this slide will be reinserted with the dark side out to indicate the film has been exposed. Two sheets of film may be inserted into one holder, one on each side. Save your empty film boxes and packaging for storing your exposed film. Be sure to clearly mark "exposed" on the appropriate package to eliminate confusion later. To load the filled holder into the camera, first make sure all adjustment knobs have been tightened down so the loading procedure won't disturb your composition. Then pull out on the frame release handle on the back of the camera until it extends at a right angle and the small rollers rest in the depressions. Insert the film holder in the space behind the groundglass, making sure the bottom of the holder rests on the protruding stops. Release the frame release handle to close up the camera back.

To load film into the Polaroid holder follow the instructions on the holder and film sheets. Loading the Polaroid film packs doesn't need to be done in darkness, as the packaging protects the photosensitive surface.


The Polaroid holder must be clean to operate properly, but doesn't need cleaning with each use as do the film sheet film holders. Check the rollers for an accumulation of chemical residue and follow the cleaning instructions on the holder.


Before inserting the Polaroid film packets, check to make sure the operating lever moves the catch at the end of the holder which must grab the metal strip on the end of the film packet. Also, when removing the center of the film packet to expose the film, don't remove it all the way as it will then be impossible to reinsert. Finally, when you're ready to process the Polariod sheet, make sure the operating lever is pushed all the way to the P and not caught on an adjacent lever.

After you've taken a light meter reading, you must also compute how much to increase the exposure based on the length of the bellows. This is called adjusting for the bellows factor and is computed using the following formula:

The lens focal length is noted on the lens itself. (Media Loan's Calumet lenses have a six inch focal length.) Obtain the bellow length by measuring with a ruler from the lens to the film plane.


Close the camera shutter and then adjust its speed for the appropriate exposure based on the preselected diaphragm setting. Cock the shutter and remove the dark slide from the film holder. Now you must wait until any vibrations of the camera resulting from these procedures have had a chance to subside. Finally, use a cable release to open the shutter; pressing the shutter release button by hand could generate enough movement to dull the image sharpness.


After exposing your film, replace the dark slide with the dark edge out and turn the latches on the end of the holder to make certain the slide won't be accidentally pulled out.

This is the largest film camera, for film photography beginners, it might be better to start with a 35mm camera.