A proficiency test is required to check out 16mm film projectors. Schedule a proficiency at the front desk of Media Loan or by calling 360-867-6253. Read this operating guide and complete the written portion of the 16mm Film Projector Proficiency Test prior to your scheduled proficiency. Bring your answer sheet with you to the test, which should take approximately 30 - 45 minutes. 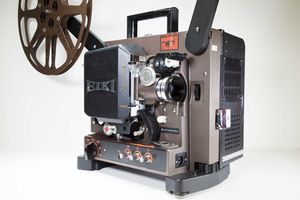 When you've finished loading the film, turn the Function Lever clockwise to the first lamp position (the second lamp position is used only if you need a brighter image). Focus and frame using the controls near the lens as detailed under 'Setting Up.' Turn on the volume and adjust the treble and bass for tone. An external speaker may also be plugged into the front of the projector.

Please note: Media Loan is not responsible for film damage. If your projector is not running properly and the above adjustments do not help, remove your film manually and ask someone in Media Loan for help.